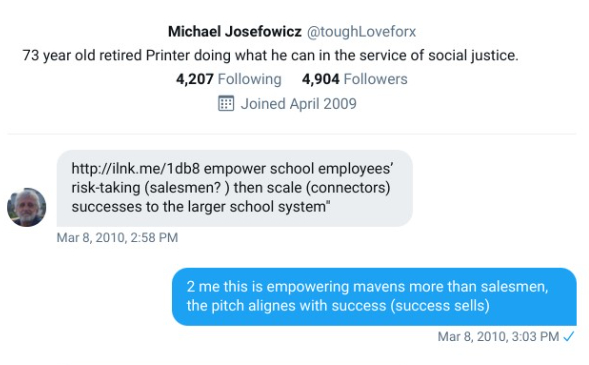 The image above is a snapshot of my first Twitter DM interaction with Mr. Michael Josefowicz. Michael reached out to me in response to a post I had written here at KARE Givers in January 2010 entitled "Why Is It Always About The Funding?", one that he had already commented on in the comment stream. He joined Twitter in April 2009, and I joined shortly after in June of the same year. If memory serves, our first encounter in the Twittersphere began at the original #ecosys chat and would turn into a lasting friendship that I could never have anticipated. I wish I could tell him one more time how grateful I am for that. My dear friend and confidant passed away suddenly just a couple of days ago.
Our first match of "Twitter Tennis," as he liked to call it involved a deep dive into the issue of teacher preparation and professional development. At the time Michael's Twitter bio included something like "Retired Printer- now I want to blah blah about fixing high school." I can tell you he wasn't kidding. Michael had done some teaching at Parsons Design College in New York, and although he was without a shadow of a doubt, an exemplary publisher, I have always thought he missed his true calling. Michael was at his core an insightful and passionate teacher. His passion for sharing knowledge and insight with virtually anyone who would listen is legendary in social media circles and to anyone who knew him personally. I give him all the credit for providing me with more professional support to evolve my teaching than any other person or process I've encountered since becoming a teacher myself over 26 years ago.
It's interesting that after ten years of knowing him, he was circling back again to the issue of teacher professional development in a Facebook thread instigating yet another cohort of passionate others in a deep dialog about how to improve the manner in which teachers improve their professional practice through a new model of professional development. Michael quite literally never stopped thinking about the things he was passionate about, and he never stopped trying to engage with others who showed any sign at all of possibly sharing his passions.
My last interaction with Michael was on the day of his passing. I had stumbled across a piece he has asked me to write addressing the issue of boys at risk back in 2018. I had solicited his feedback on the original draft; you can check it out here.  The interaction went like this: 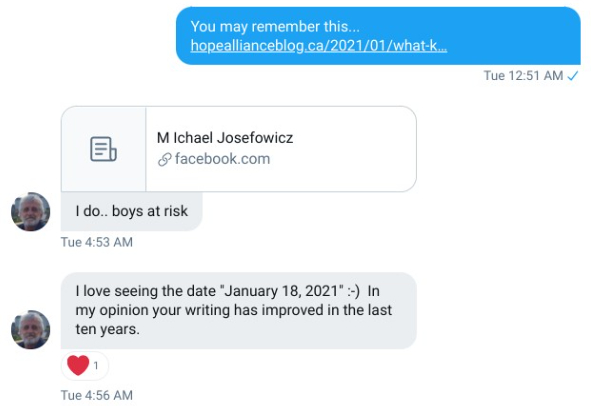 Michael immediately forwarded the post to his network as he always did one way or another. He also never missed an opportunity to compliment me on my writing. I have shared everything I've written with him for the last ten years, and he always read it, and he always provided feedback. In his comments within the original Google Doc draft, he mentions his most recent work with Printernet Africa, a dream of his using print to "do well by doing good." He first started talking to me about the Printernet concept in 2010 along with the earliest iterations of nemetics using #ebdish and first posting about it at the Nemetics Instagram account. Since 2018 Michael has been testing his Nemetic theories on the ground in Africa with a dedicated cohort of local people in small villages publishing newsletters of local interest highlighting traditional languages and the English translation. Most recently he has been working with the same cohort to develop course work in project management that creates a revenue stream in support of their Printernet effort. As evidenced by his comment on the draft referred to above, (see below,) it is deeply satisfying to know that Michael was feeling a sense of progress and success in the Printernet project.

The point is that PrinterNet Foundation ( yeh I finally did it ) does not give charity. We make investments and the return on investment is measured in the growth of social capital in the village.

I could go on forever about Michael's insatiable passion for projects designed to improve systems, help people, analyze communication and interaction, and many other things he was brilliant at, but that's for the long now. Over time the countless people he inspired quite literally around the globe will continue his legacy work through the Printernet, the Nemetics Institue for Participatory Action Research, and as an extension of every conversation, he incited with them to do things better, faster, or cheaper. For now, I just want to honor Michael Josefowicz, the man.

Michael was a masterful conversationalist and a very intelligent man as all who knew him would attest, but he was also remarkably kind, compassionate, empathetic, supportive, and loyal. Michael knew I thought of him as a father figure. I looked to him for support in my professional work, and he had a way of drawing out the best in me that ended up with me feeling better about what I was doing, even when he had something critical to offer. He was a natural leader in this regard. Even when he disagreed with me, after talking to him I always felt like I'd just received a warm hug. Make no mistake, Michael could talk, but I can't remember one instance when I felt he was aggressive or intrusive with his words.
Even though ours began as a professional, collegial relationship, over time and catching me completely off guard, Michael found a way to break through my personal shell. He was a very perceptive man, and I suppose he must have devined based on the content of my writing that it was very personal for me. He began gently asking questions about my personal life and upbringing, and I shared things with him that I have never spoken to anyone else about. In this sense, he was more than a father figure, but also an elder with exceptional listening skills. He responded in ways that always seemed to afford me a slightly different perspective. He was there to listen when my son was diagnosed as a diabetic; when I needed to talk about my own troubled youth; when things weren't going so well at school, and he always asked how my wife, Bina, and the kids were doing. He would ask how Wyatt's bike racing was going; how Avery's dance exams turned out; how skiing or lacrosse was... he never missed an opportunity to show sincere interest, and he'd follow up with a compliment about how impressed he was with all of the things my family does. Michael was the most authentic person I have ever had the privilege of calling a friend.
He would also tell me about his wonderful family. He was a dedicated and loving family man and shared so many great things his children and grandchildren were doing. If you know him, you'll know that Michael's granddaughter is the one responsible for much of the theoretical modeling of Nemetics as displayed in her pipe cleaner models. You'll know that Michael took great pleasure in the simple things. He loved his dear wife's cooking, his coffee, and he enjoyed his cigarettes. He often spoke of his beloved Brooklyn and the walks he'd take through the neighborhood, and I deeply regret running out of time to take him up on his offer to show me all the good spots there while visiting in New York. Michael also has a completely remarkable story behind the story of how he became the guy I've always thought of as the American Dreamer, but that's for another time. I told him on several occasions that his story needs to be told, and that I'd be honored to write it. I need to do that. As MJ would say, "time is the deep fundamental, and things will happen when they're supposed to happen."
Alas, it would be impossible for me to fully explain how profoundly my life has been affected by Michael Josefowicz. I too have a story behind my story, one that Michael knew a great deal about. He walked with me through the muck of my life, never judging, just listening. He has a way of making me believe in myself; something very hard for me. He saw me differently, with his heart and in a way that always left me feeling better and more confident. It is because of Michael's encouragement that I have continued writing about those things that put gas in my tank. It is also because of Michael that I have met dozens of other passionate individuals from his vast network of people with diverse backgrounds, a most interesting and rewarding privilege for me.
Michael was a humble, caring, kind, and intelligent human being. I fear I will not meet another like him. I feel responsible to live in his image and carry on the profound work he was doing. He inspired me to be a better person, father, husband, and teacher, and I feel an incredible sense of commitment to support others in the selfless and dedicated manner that he never failed to.
Michael, I miss you terribly. I have found myself several times in the last couple of days feeling the urge to message you so I could get that warm hug feeling; that boost of confidence you always were able to provide. Yout took the time to know me; to really know me, and you liked what you saw and I can't thank you enough for that. You were my inner circle of one. I didn't need anybody else.
I want to offer my deepest condolences to Michael's family, all of his friends around the world, and the countless others he was able to "make things suck a little less" for.  I am eternally grateful for the people you brought into my professional and personal life, and I will do my best to stay connected to them. I will be asking myself regularly "what would Michael say?" and I know that you will find a way to answer me.
Thank you, my dearest, closest, and wisest friend.
May you rest in peace, Michael Josefowicz.