I've been involved with a wonderful group of people since 2011 working on a project called Grow Boys. We know now that in the beginning our paths converged as a result of what we were observing in our work and our community, and because we were all asking similar questions. We saw boys struggling in so many ways, and we were wondering why. All of us represent agencies with particular exposure to the struggles of boys... among us are teachers, service groups, business owners, health care providers, school administrators, social workers, counselors, youth workers and others who work closely with boys every day. A friend recently pointed me to this video trailer from the Representation Project... (language warning)

The film hasn't been released yet, but as soon as it is I plan to screen it at my school for parents, staff and students and I intend also to use the educational material offered as well. There is another film called MISREPRESENTATION that I also intend to purchase and use to work with the same groups. This material is really good stuff. THE MASK YOU LIVE IN frames the reason why our diverse group of engaged adults got together back in 2011, and we believe strongly that we need to continue our work but (surprisingly to us since the beginning) we have not been immune from detractors. This is what I want to talk a bit about.

To state the obvious, there is controversy that runs along gender identity lines. No matter what side of this controversy you fall, it would be difficult to justify that it manifests in any good way for any particular individual, male or female, who is struggling through a personal search for identity. How we choose to represent ourselves to the world is a deeply personal decision, one that should be honored and respected. But often it isn't. Expectations, perceived or real, of what we think we should represent will either allow or prevent us from being true to ourselves. No matter what we decide to represent, judgment seems to rear its ugly head and we are then forced to consider our choice with acceptance or not. But what if we didn't have to do that? What if the world respected each of our decisions to be what we felt natural being; to be what we wanted to be and represent what we wanted to represent without having judgment passed upon us?
As a young boy and into adulthood, I've been judged by the way I have chosen to represent myself to the world...actually a more accurate word would be misjudged. I have learned how to recognize this and I try to make adjustments, but I cannot tell you there hasn't been a struggle. If we could reduce or remove the struggle also known as stress, anxiety, diminished self-worth, fear, intimidation, and a litany of other debilitating factors associated with this judgment, why would we not do that? This is what Grow Boys aims to do for boys of all ages.

The judgment comes from many angles, but it seems perhaps that the most prevalent involves the stereotypes that exist regarding how males and females are 'supposed' to be. I appreciate that the Representation Project films address this issue. There are such aggressive perspectives on gender identity coming from a broad range of individuals and groups. At question is more than just gender identity as in sexual identity. The definition of what makes a man a man and a woman a woman is extremely complex, but often reduced to stereotypes of one or the other. The interpretation of these stereotypes can be so ridiculously challenging and debilitating to either males or females trying to establish healthy, happy well-adjusted personas. This snippet from Planned Parenthood explains the issue quite clearly and simply...

What Is Feminine? What Is Masculine?

Clearly, society’s categories for what is masculine and feminine are unrealistic. They may not capture how we truly feel, how we behave, or how we define ourselves. All men have some so-called feminine traits, and all women have some so-called masculine traits. And we may show different traits at different times. Our cultures teach women and men to be the opposite of each other in many ways. The truth is that we are more alike than different.
- See more at: http://www.plannedparenthood.org/health-info/sexual-orientation-gender/gender-gender-identity#sthash.g6Bs0BRx.dpuf

The fact of the matter is we have established a set of criteria that we assert defines a typical boy... the film trailer above addresses this so well. But what of the boys who do not fit the bill, those who are perhaps more sensitive, less rambunctious, inclined more toward being less impulsive and more thoughtful? I am going to say that these boys are not the minority as is so popularly stated. I am going to say even that the term 'gender atypical' used to describe these boys is unfair and inaccurate as it relates to anything other than cultural norms or expectations of what a man or woman 'should' look, sound, and act like. We tell them what a man looks like, sounds like, and acts like, and then we judge them based on how closely they conform to this standard. This is really tough for so many boys who are trying to grow up and be accepted for who they really are and want to be more of. I can't tell you how many times I've sat in a dressing room after a fight during a hockey game where one of my teammates was going through a really tough moment trying to deal with the emotions that go with fighting when one doesn't really want to... I've been there as the combatant myself. I've seen grown men cry or even vomit following an on-ice brawl because they were so uncomfortable in that role as hockey fighter, but felt pressured to be that guy, the "goon" as they say. These guys are among the toughest men I've known, and some of them cried or vomited as a result of the pressure they felt to "be a man." Even the toughest, most resilient men among us have feelings and emotions that tend toward the feminine side of the scale more than the masculine. 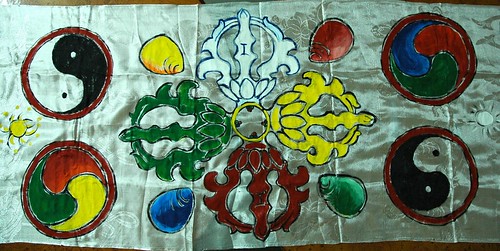 So how do we help all boys and men feel more at ease with themselves, and more confident to represent themselves without fear of judgment or pressure to be 'someone else'? I think the answer is found by steering clear of expectations of being 'typically male' or being 'typically female' and approaching it more from a context considering the masculine and feminine perspective. Instead of expecting our boys to be as close to our cultural defined ideals of a 'typical man', I suggest that each of us as males have some part, a lot or a little that could be described as our feminine side, and some part, a lot or a little that could be described as our masculine side. To me, the closer a guy of any age can get to a balance between the two sides the better. Men and women are different, of that there is no doubt, but men who have a greater ability to identify with both a masculine and feminine perspective hold a gift that allows them to see things differently when necessary, and deal with people more effectively and with greater understanding. This belief also explains in part why so many women are doing great things working with boys of all ages... and why we have so many effective and understanding women working with Grow Boys. These women are those that have an obvious tendency to understand a masculine perspective as well perhaps as they do a feminine perspective. They see things in a balanced way. They combine or leverage a masculine or feminine perspective as necessary to communicate more effectively and understand people more effectively. How well either males or females see and interpret both perspectives in an integrative and purposeful way considering the context of situations, interactions, challenges, relationships, etc. should be the socially accepted standard for males and females that we judge to determine the character quality of an individual, not how close one is to actualizing a culturally stereotyped man or a culturally stereotyped woman.

So, our group of engaged collaborators working on Grow Boys is presented with a challenge. We believe that we need to continue working to address the needs of all boys no matter where they fall on the spectrum of more 'typical' or more 'atypical'. Our vision is,


… A society where the unique social, emotional, physical and psychological needs of boys are supported without bias or stereotype.

We believe that there are all kinds of boys out there, each worthy of acceptance. The way we choose to accept them is to honor and respect their unique qualities of character. We also choose to accept the choices they make with respect to what they do, feel and say. We intend to validate these choices and help provide outlets for them to express themselves freely without anxiety to measure up to a culturally defined standard of high quality 'male-ness' that some will continue to expect from them. We understand that there are boys who will epitomize the cultural standard of stereotyped masculinity, and we honor and respect them too... we understand more than anything that every boy no matter where they fall on the spectrum of more masculine or more feminine in their unique perspective needs our support to grow up as a healthy, happy and well-adjusted man. He will in turn treat his sons and other boys he encounters with respect and honor validating their unique perspective and helping them feel purposeful and happy.
Posted by Sean at 9:43 AM