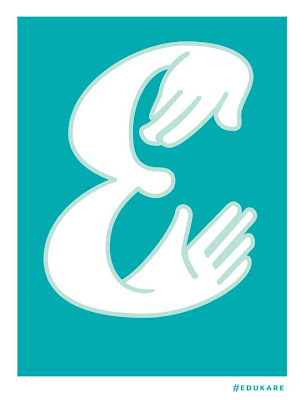 Recent #ecosys Twitter (EcoSys: Exploring the future of K12 Education) chat surrounding the issue of common core curricular standards has me thinking about how EduKare would respond to the issue. In the interest of furthering the EduKare thought experiment, like everything else about an EduKare approach to teaching and learning, the element of assessment would require a series of small shifts as opposed to piecemeal change. Twisting the lens regarding how we view the role of assessment in education allows EduKare proponents to use their best integrative thinking to identify currently useful elements of assessment, and insightful, informed ways to improve them. Despite what some educators appear to believe, it's essential that we know what kids know.


I believe that there is a element of self-efficacy to learning and acquiring knowledge, but it would be naive to assert that learning is entirely personal and serves no social purpose for the individual, and as it applies to the larger social need to produce citizens who are educated. Having said that, alas, all learners are different. There are particular skills and knowledge that society needs educated kids to possess once graduating from high school. Some of these could be considered basic (literacy and numeracy) and some are very specific depending on the service kids are going to provide to society relative to their career choice. How best to ensure that all kids possess the knowledge and skills basic to social function while also providing opportunities for them to extend themselves toward more advanced learning is one of the questions EduKare schools aim to answer. How can we customize learning so needs are met across the learner spectrum, and how can we customize the assessment of learning so kids are measured authentically and fairly against their own progress?

A common core set of benchmark skills is a necessary element of the school system. We need something to measure progress against. In golf as I strive to improve my score, I try to reduce my handicap against a benchmark of par, or achieving a zero handicap. Benchmarks are useful. In schools, perhaps if benchmarks were applied on a broader spectrum, and the schedule applied to meeting them was adjusted to reflect individual learner progress based on their developing cognitive strengths as opposed to norm-referenced developmental levels, we could then effectively apply a customized approach to learning, and also the assessment of learning. Contemporary educators are doing a really good job differentiating instruction, but we're still assessing kids using standard time-lines and homogeneous developmental assessment paradigms.

The golf analogy helps clarify the shift. If I want to know if I've improved at playing golf, I have to play golf. Playing golf is the test; how I measure myself against myself to see whether I have improved since the last time I played. Assessment in the education system could mirror this paradigm. To know if kids have improved their cognitive ability, we have to witness them attempting to use cognitive ability so we can measure them relative to the last time they displayed it. This applies to any form of assessment across all contexts. We have to do something to know how good we are at doing it. It's not the need to measure progress, but the time-lines we apply to the process that EduKare questions.

Relatively speaking as influenced by a litany of uncontrolled social, emotional and cognitive variables, we develop skills and abilities at our own pace. What I'm going to suggest here is that the test, (framed as the opportunity to do what you're trying to become better at doing,) could become far less anxiety-inducing if it was flexibly applied to a time-line that individual students had more influence over. EduKare schools are social learning places. Within them the social and cultural interactions that occur should be maximized and leveraged toward the creation of a vibrant and cohesive learning culture where interdependent learning is key.

Jean Piaget's claims and the influence they have had on the creation on school curriculum represented some of the best thinking surrounding child development at the time. His natural line perspective on the maturation process sparked a great deal of debate over how kids "grow up" that continues to this day, and that's a good thing. However, as all teachers know, there are kids in every classroom that do not fit nicely into Piaget's natural line of development perspective. Should we continue to group kids into predetermined cohorts based on theory stating that all fit generally into a natural schedule of developmental milestones?

Lev Semyonovich Vygotsky was another prominent thinker in the realm of child development that believed learning was more a social process that could be enhanced through the understanding of zones of proximal development. Both Piaget and Vygotsky could be considered constructivist thinkers, but from different perspectives. Piaget was a cognitive constructivist, while Vygotsky was a social constructivist. An EduKare teaching and learning environment aligns better with the social constructivist approach; the idea that meaning and understanding grow out of social interactions.

We're learning how to differentiate instruction to address unique learning needs, but we don't routinely match these efforts with differentiated assessment to address unique student abilities. We typically give the same test on the same time-line to kids who have learned differently, and at different levels of proficiency. It's not the test that's problematic; it's the test schedule. An EduKare teaching and learning philosophy perceives learning as a thirteen year journey, but not one that fits neatly into grade levels.

A colleague said to me this week that she always has a hard time with report cards. She explained that no matter what sort of positive progress each child has made in the term of reporting, when measured against a grade level standard, it's very hard to provide the sort of positive feedback that the child needs to motivate them to keep working hard toward their learning goals. The child may be leaps and bounds ahead of previously measured levels of proficiency, but not yet advancing to a higher scale of measurement. On the contrary, considering the small shift, if that child was to be placed in an age cohort rather than a grade cohort, progress could be measured against previous skills and knowledge allowing for a unique and targeted reporting of progress as opposed to achievement.

This is not to assert that the common core or standard by which learning is measured would be abandoned in favor of a totally student-centered, self-directed process. As I said before, a common core set of benchmark skills is a necessary element of the school system, however, it's not until high school in contemporary education that kids get the benefit of some degree of customizable self-determination. When kids enter high school they choose course streams that fit the knowledge and skills they have acquired up to that point, and that support post-graduation goals they may have. We fail to address this diversity that kids represent before they reach high school age. A comprehensive set of carefully filtered core standards across the thirteen year spectrum of school would be applied to kids right from the start using the principle of constructive alignment within an outcomes-based system.

An EduKare grading system would be measured against much of the same set of comprehensive curricular standards that already exists within the education system; it would simply allow for greater variance regarding when each standard is 'achieved.' Our growing teaching ability to use differentiated forms of instruction would take care of the need to apply instruction toward the standards at age-appropriate levels without the need to even consider retaining kids to repeat a grade. Proficiency would be checked off the list so to speak, at each age level using appropriate teaching and assessment strategies that are individually determined. Adhering to Vygotsky's social constructivist theory, some kids would become proficient at particular skills earlier than others, but the age-appropriate social interaction that occurs between kids with varied abilities would enhance the zones of proximal development for all of them.

At at a minimum the EduKare school would offer nothing less than a stream that teaches core literacy and numeracy knowledge and skills. Beyond this the sky is the limit, again owing to the social constructivist approach that's inherent in an EduKare school. Kids in Year Kindergarten to Year Eight EduKare schools would target standards at multiple levels measuring their progress against previously determined progress; how much they have grown relatively since the last time they were assessed against the core or standard. As they advance from level to level based on chronological age, our efforts to help socially construct knowledge and skills with them can be made in the least restrictive, most individualized and fair teaching and learning environments possible.

Reporting of progress would be made as part of the learning story-writing process. A document that records the growing body of knowledge and skill acquisition of each child would travel with kids over the thirteen year journey that they are mainly responsible for writing themselves. There would be no need to standardize the form as long as locally customized versions reflected individual progress against the common core set of standards applied as curriculum, and included the total set of standards possible over the same thirteen year period of time so the variable nature of achievement could be reflected for each child.

At the end of year twelve kids would be assessed relative to the degrees to which common core standards were met for each of them within the different subject areas of study. This would be compiled in a locally developed final statement of proficiency measured against the common core standards that could be translated into prerequisite levels of achievement required by post-secondary institutions in the same manner that occurs now.

EduKare schools are flexible and adaptable. By expanding the scope of curriculum to represent the unique thirteen year journey of each student through a set of core outcomes that spans the entire time period, EduKare schools become flexible relative to individual student abilities, zones of proximal development and levels of motivation in learning. They also become adaptable to each student by applying socially appropriate instruction to kids at each age and relative cognitive ability level. They also become responsive in an assessment context by utilizing locally designed formats to provide feedback to students that measures each against themselves instead of each other, and against curricular outcomes that are individually applied as opposed to within a norm-referenced context.
Posted by Sean at 9:43 PM