RedCamp15... All In for Education Improvement

Glendale Science and Technology School hosted its third edcamp yesterday. RedCamp as we like to call it, has been an annual event at Glendale for three years now, and it continues to gain momentum. Once again, an incredibly diverse group of educators, pre-service teachers, administrators and senior administrators, learning specialists, agency representatives, community members, other edcamp organizers, parents, students and others invested in better teaching and learning came together for social collaboration and connected learning. 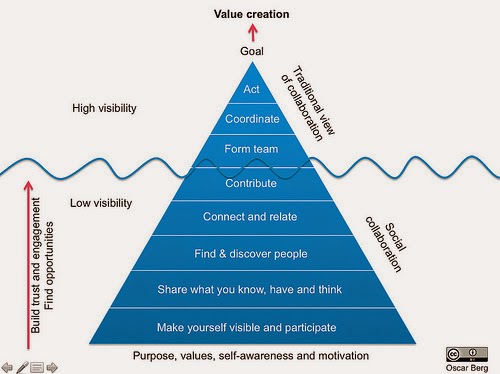 In the morning we spoke about social collaboration and how important it is to optimize environments of innovation and growth. If we take a closer look at the social collaboration pyramid we will see that the efforts made below the surface wave closely align with the spirit  and culture of what edcamps are all about. Everyone who attended RedCamp15 yesterday made themselves visible and participated. They shared what they knew, had and thought. They found and discovered people; both those who shared their views and perspectives, and those who had alternative views and perspectives... a necessary condition for authentic cognitive dissonance. They connected and related to each other and certainly contributed their experience, knowledge and perspectives to the event and the thought streams that emerged as the day progressed. This is what happens at edcamps. This is what sets up the form, storm, norm and reform process (that occurs above the surface wave) for success. If the below the wave efforts aren't made, the above the wave efforts tend to lack substance, purpose, meaning and authenticity. As is often the case, the real work happens below the surface.

Making Ourselves Visible and Participating...
Edcamps are very much about connection. Each of us who attended RedCamp15 yesterday took time on a Saturday to attend a professional development event because we care about what we do and we want to be connected to the process of doing it better. I was speaking with a colleague later in the day about the concept of change agency. I don't think edcamps are about change; I think they're about improvement. Participants at RedCamp15 celebrated much that is good, effective and purposeful in education yesterday, but they also worked hard at discussing and sharing ideas about how it could be better. I think I'd like to call edcamp participants "improvement agents" instead of change agents because of this. Edcamps are bursting with positivism and pro-activism designed to move things to better places understanding there is always room for refinement.

Share What You Know, Have and Think...
The Learning Pyramid below is an accurate representation of what happens at edcamps... and what happened yesterday at RedCamp15. Once again, it's not about contextualizing the "lecture" as a bad thing, but rather about putting it in its place and understanding that optimized learning happens in different ways and in different contexts. At edcamps there is a heavy emphasis on demonstrating, discussing, practicing and teaching others during sessions that emerge through the suggestions of participants on the morning of the event. The lower four elements of the Learning Pyramid are the ones that edcamps emphasize making them a pretty good bet for those looking for optimized learning, and for those engaged social collaborators who attend them. 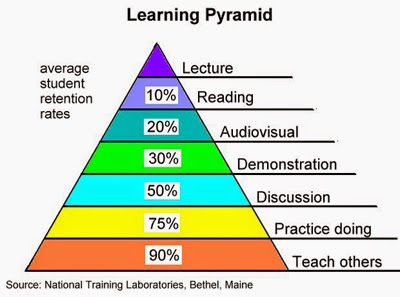 Finding and Discovering People...
We had such an incredibly diverse group of people join us yesterday. Perhaps the most interesting and hopeful cohort among them were the dozen or more pre-service teachers who joined the conversation and shared their passion for teaching and learning. One of them was a first-year pre-service teacher. I mentioned early in the day how impressive it was that these fine young people took their time during exam preparation to join us, and how some of the rest of us who may be in the hiring mindset in the near future should take note. That kind of commitment is commendable and noteworthy.

At RedCamp15 I was fortunate to connect with an administrator that I attended high school with and hadn't seen since then. My wife made a similar connection after encountering two teachers who went to junior high school with her back in her home town. We shared great memories and stories about where we all come from in a positively nostalgic context. Another respected colleague of mine made a connection with an educator who used Mine Craft ubiquitously in her classroom simply by asking her prior to her session if she would be interested in collaborating in support of Reading College, an initiative he spearheads in cooperation with Red Deer College on behalf of entering third-grade students in Red Deer. No matter if the connections were new, or previously constructed, I couldn't have counted the total number and different nature of people connections that were made yesterday... too many to count for sure!

Connecting and Relating at RedCamp15...
Everyone at RedCamp 15 was there because they wanted to be there... which makes connecting and relating pretty smooth:) We even had a crew of outstanding student volunteers who supported RedCamp by hosting delegates, attending sessions, setting up and taking down, preparing food, and a bunch of other helpful contributions. How cool is it that a group of 7th and 8th-grade kids get up at 6AM on a Saturday to go to school when they don't have to! One RedCamp'er commented via Twitter following the event...

@graingered So impressed with your student leaders today. Please pass on our appreciation of a job so well done, with positivity & smiles!
— Kelli Holden (@KelliHolden) April 11, 2015 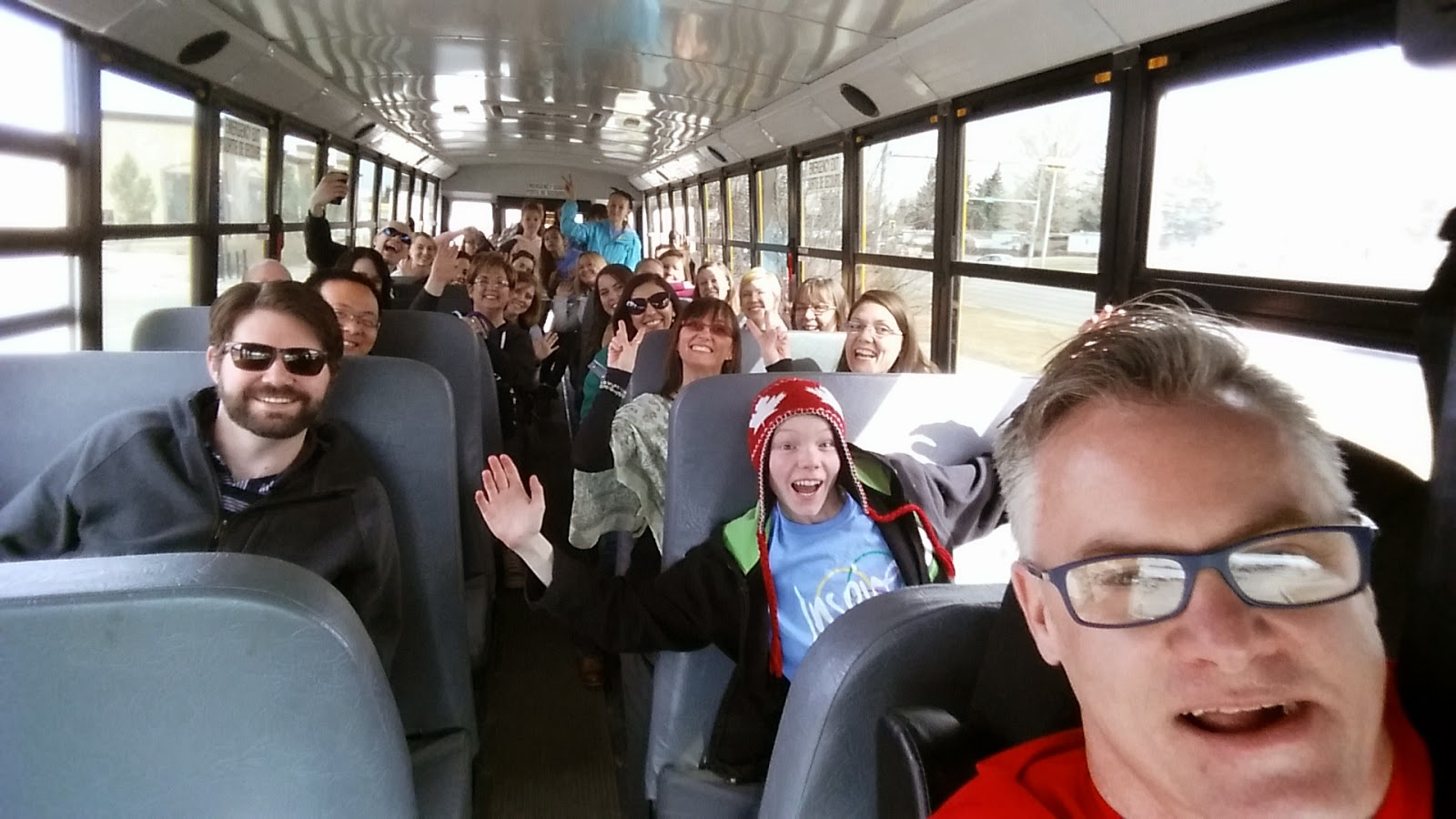 I promised to take the kids out for lunch to the plaza down the street from the school to show appreciation for their commitment, and it struck me just before getting on the school bus "why not invite everyone?" So I did and from the look of it in this shot we were able to grab after arriving at the plaza, the adults and kids were connecting and relating just fine, and we acted responsibly by carpooling too!

All-day long if you were at RedCamp15 you would have witnessed folks talking, shaking hands, laughing and generally looking like they were enjoying each other's company... this is a good thing! At the closing address for the day I explained one of the mantras often spoken at our school...

Like-minded people addressing commonly held interests sharing a passion for learning and a desire to create optimized teaching and learning environments; that's what you'll encounter at an edcamp. If you're an educator, why wouldn't you want to experience this environment, and have a bunch of fun while you're doing it? I know; I can't figure out why you wouldn't either:)

Contribute...
Probably more than anything, I think the reason people are motivated to attend camps is their desire to contribute to the art and science of teaching. People who are drawn to the edcamp style of professional and personal development are those that understand the value of face-to-face interaction with others. They understand that to contribute purposefully it makes sense to be present; in-person physically, emotionally, and cognitively... exposed and vulnerable as learners and teachers. At RedCamp we invite a cross-section of people who understand the value-added nature of being present, exposed, and vulnerable. There are no egos at an edcamp, nobody gets paid and there are no sages on stages. Edcamp participants know that the answers come most genuinely from the middle; the room contains the answers when everyone in the room plays on a level field without any hidden agenda or ulterior motivation. When the playbook gets opened for all to see the most amazing dialog emerges, the box disappears and great ideas start to weave their way through the room, intertwining into neural strings connecting us in cerebral learning circles. Limbic loops are formed when smart, committed and open-minded people sit down in person to talk about topics, challenges, issues, and ideas that they share a common interest in.

Edcamp participants are these people. They are the ones all in for education improvement.
Posted by Sean at 9:27 PM