Teaching Within the Culture of the Hope Wheel 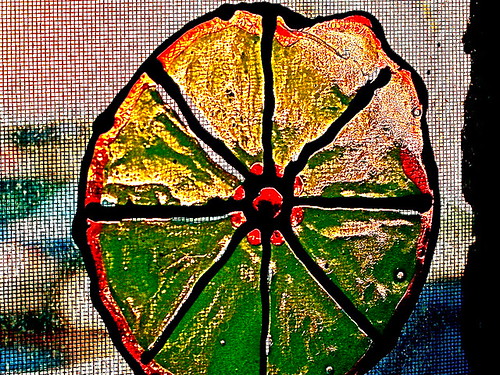 by  gmayster01 on & off ...
Note: The following is an excerpt from the book "Innovative Voices in Education-  Engaging Diverse Communities." I wrote the closing chapter of this book, the one this excerpt (with minor changes) originates from.

The above statement came my way via Twitter some time ago. I've been thinking about it ever since. Does culture get thought about? What makes culture definable? Should we be able to define culture? Is there a template for a positive school culture?

If culture doesn't get thought about, it should. Perhaps this is the missing link in some schools... thinking about culture. There is lots of lip service paid toward the element of school culture, but how many actually make a deliberate effort to define their own school culture? With the assistance of my former colleagues during graduate school, I made the effort. The manifestation of our school culture evolved as a circular representation called the Hope Wheel.

I created the Hope Wheel during graduate school as part of my action research around emotional, social and moral education. I was struggling to visualize a paradigm that could encompass an intercultural perspective; one our very diverse school needed to shift toward. I returned to the roots of my professional teaching choosing a medicine wheel model to represent my evolving point of view. My experience working and living among First Nations people exposed me to timeless wisdom surrounding learning philosophy. To First Nations people, learning is the essence of living; it’s organic and natural, and for many, represented by the medicine wheel in one form or another.


Michael and Judy Bopp are co-founders of Four Worlds International, a human and community development organization with roots in indigenous peoples’ development work in North America and well known for its ability to bridge between the cultures of communities and the culture of the agencies and professionals who attempt to serve them. (Bopp J. B., 2006) They explain that,


Medicine in tribal tradition refers to any substance, process, teaching, song, story or symbol that helps to restore balance in human beings and their communities. The medicine wheel is an ancient symbol which represents an entire world view (a way of seeing and knowing) and the teachings that go with it. (Bopp J. B., 2006, p. 22)

Borrowing from the timeless wisdom of the medicine wheel provides us with all we need to establish a simple, non-linear framework of intercultural purpose. 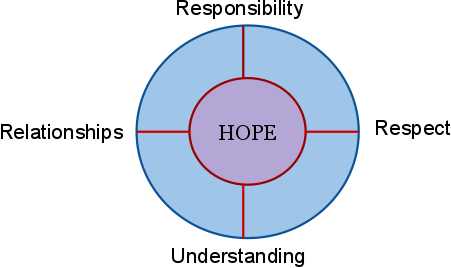 In the beginning, we needed to establish some understanding of our students' cultural perspectives.
The Hope Wheel became a powerful guide for my colleagues and me as we navigated the varied cultural perspectives of our students. We placed our students on the Hope Wheel relative to their experiences in life, how they viewed them, and the emotions created as a result. As we became aware of their social, emotional, and cognitive states (what we framed as their cultural perspectives,) we were able to work with them in purpose-driven contexts as they learned to advance themselves on the wheel in different domains of learning how to know, do, be and live with each other. We formed meaningful dialog around each student’s variable position on the wheel and used the graphic model as a template for personal growth.

In the context of creating culturally competent students, the Hope Wheel provides teachers a valuable visual representation of their development and progress. Hope is the elemental foundation supporting the process. Surrounding this hope are four concepts, each representing a concentric path toward cultural interdependence. In the east, the first path is Respect.

Respect is the place on the Hope Wheel where young people gaze with wonderment at the world surrounding them and begin to simply realize they are part of this world; they are learning to be. They begin to feel an implicit purpose to learn. They need answers to the question, “why?” When we walk the path of discovery with students, we support finding the answers they seek; we establish value in learning… we help them define purpose. A template for interaction between themselves and others is established on the path of respect. Interacting with ideas and concepts in the domain of respect leads to the establishment of self-identity, and orients kids toward the evolution from dependence to independence.

The domain of understanding is where kids learn to know. Skill acquisition, new knowledge and rationale for life-long learning are established within this domain. Students at this stage begin developing an independent nature as they take risks with learning and start to develop intrinsic motivation to discover. In the domain of understanding students sharpen their focus on the surrounding world; they look more critically at themselves and others in their quest to gain knowledge and make sense of things.

When students move to the relationships phase of the wheel, they begin to understand the value of interdependency among people; they learn to live with each other. Kids who function competently at this stage seek extrinsic sources of support in their developing relationships, and they begin to understand that interdependency is about distributing strengths among a network of collaborative people working together to learn. In the domain of relationships, students become more resilient by seeking the support of significant others. They learn how to think deeper and critically about ideas, and they establish self-imposed boundaries.

Students who have traveled full-circle on the Hope Wheel enter the domain of responsibility where they learn to do. They display an implicit understanding of the imperative to serve themselves first so they can responsibly serve others. They understand what taking action means. They become caregivers for those traveling the hope paths behind them. In the domain of responsibility, students display intrinsic knowledge and insight as a result of their experience, and they begin to feel confident enough as leaders to engage others; to support and nurture them.

The Hope Wheel is a grassroots theory applied to our personal and interpersonal perspectives. It’s a model we can use to place ourselves and those around us on a continuum of human development. We enter the phase of respect when confronted by something totally new but perhaps function confidently in the domain of responsibility in a different context as a result of our experiences and the knowledge we gained as a result. Where we fall on the Hope Wheel is a reflection of our developing cultural identity. Owing to the notion that self-awareness leads to self-confidence and the willingness to share our values and perspectives with others, the Hope Wheel is also a conduit for confident intercultural communication leading to increased cultural knowledge and responsiveness.

The cultural perspective we hold is shaped by our experiences as influenced by our birthplace, our family, our spirituality, and the zeitgeist within which we were born; it’s the cultural reality lens we look through. Our cultural identity is learned beginning the moment we’re born. Obvious physical characteristics and genetic traits define our culture in part from the second we’re conceived. After we’re born, the evolving cultural identity we form is largely influenced by our relationships and surroundings.

Steve Van Bockern, coauthor of “Reclaiming Youth at Risk- Our Hope for the Future” (Brendtro, 2002) refers to this identity as our cultural tail. I had the pleasure of attending a retreat with Steve on the Morley Indian Reservation west of Calgary in 2002. He explained that we can’t cut off our cultural tail; it’s always there, behind us affecting our perspective, but also that great things are possible in everyone’s future despite this tail that follows us. (Bockern, 2002) Whether good, bad, or indifferent, our cultural tail tells the story of where we’ve come from; who we are in terms of how our environments affect us, but it doesn’t have to predict where we’re headed.

From a cultural perspective, in many ways, I believe we begin our lives rather innocently. Like clay to the sculptor, we start as an unformed material yearning to be molded and shaped into a more tangible form; our growing cultural identity. Just as soon as we see the light of the world we begin forming perceptions and feelings about our culture and how we are different from others. We are the sum total of what we think we are. Adults must be responsible for noticing the cultural perspectives of children so we can help them form positive perceptions about their personal identities. This enables them to confidently build relationships and circles of support as they share their perspective with others.

These relationships of support form the basis of the school culture I am currently immersed within. Like we did back when the original idea to represent our evolving school culture with the Hope Wheel was conceived in my old school, my colleagues and I at Glendale Sciences and Technology School are understanding that the cultural perspectives that each of our students wears on their sleeves are the sum total of what they think they are... what we are now referring to as the story behind their stories. We are making diligent efforts to learn these stories so we can serve our students in ways that nurture the chapters yet to be written... the ones with happy endings.
Posted by Sean at 12:56 AM