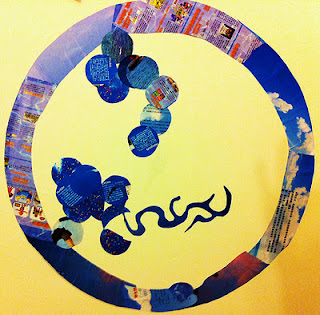 I'm fond of circles. To me circles represent learning that is non-linear, organic and never-ending; not the type I typically experienced as an undergraduate student in the Faculty of Education I attended. A linear path was more or less set out for me in pre-service teacher training, (but there were some bright spots,) and I did what was asked of me. More recently I have become involved in less linear learning paths, but only in the last few weeks have I contextualized them as learning circles. All the way through my K-12 education, and at three post-secondary institutions since then, I always knew when I was immersed in an authentic, organic learning environment, I just didn't know what to call it. It was about the spirit of my involvement in learning, and the spirit of those around me. Collectively we created learning environments that were comfortable and non-threatening, strength-based and multi-faceted. A bright-spot example of what I would have called a learning circle at the time if I had thought about it in that context was my experience in a class taught by Dr. David Wangler.

Dr.Wangler insisted that his students did two things... we had to read, we had to write and we were guided to do both using the best resources available at the time. My undergrad years pre-date widespread use of modern technology in the classroom, so that meant we actually had to read books; lots of them, and then we had to write about what we read. Years ahead of his time in the realm of creating an authentic learning environment, Dr. Wangler set up his class so the students were the drivers of their own learning paths. At the beginning of the term, he asked us to sign a contract stating the mark we intended to get at the end of the term. Each requisite grade corresponded to a set of "readings," five picked by him and the rest varied in quantity according to the mark we intended to receive (for a seven out of nine, I had to read 18 "books," each the equivalent of 200 pages.)

Dr. Wangler didn't stop there. He also allowed us to choose movies for book credit (I watched Sophie's Choice, Apocalypse Now and A Clockwork Orange) that supported our self-directed learning paths, as long as they could somehow be associated with our thoughts relating to the five thematic philosophies he chose for us stemming from Skinner (behaviorism), Kazantzakis (existentialism), Dewey (democracy), Freud (psychoanalytical theory), and Socrates (absolutism). As I think about it, he even gave us one book's worth of credit for getting together as a group of classmates to reflect on what we were talking about in class, (sometimes these Friday afternoon sessions at Angelo's Pizza would end at about 1:00 AM.) Some of the books I read during that semester endure as deeply influential and personally meaningful... Painted Bird, by Jerzy Kosinsky is an example.

When Dr. Wangler introduced each of the five philosophies at intervals throughout the semester, he would actually come to class dressed as the character representing that philosophy and then play that role all day long... even in the cafeteria and common spaces in the faculty. He would remain in character all day, answering questions from the perspective of each philosophical icon. I can say sincerely that I had lunch one day in a cafeteria with Sigmund Freud. It was brilliant. I worked harder during that course than any before, or since. I contracted for a seven, but I wish it had been for a 9.

Dr Wangler used to play classical music in the background of his lectures, just the right volume so that it soothed us. He acted out the part of famous teachers and philosophers, and he told us repeatedly that we would never be able to know what his own personal perspective was... he was a zen master devil's advocate; he poked and prodded and kept us guessing all semester long. We sat in a semi cricle. He epitomized the sentiment that learning is as much, or perhaps more so, an attitude as it is a skill. He told us we would work hard because we wanted to, and we did. He was available and willing to guide us any time we happened to make an appointment, or if we were willing to show up at his daily half-court basketball game in the main gym. He supported us in all the right ways. We wrote no tests and no essays; only reflections that he read and commented on, only providing a mark during the course if a student insisted on receiving one (I don't know anyone who did.) In Dr. Wangler's class, I knew I was involved in a learning circle. Oh, what Dr. Wangler could do if he were still teaching, to make effective use of the best technology-related instructional tools available today.

The classroom we used three times per week to learn from Dr. Wangler, and each other, was nothing if it wasn't one of the worst examples of 60's era institutional grey in every aspect. The physical space was a boring, monotone, unstimulating, bare-walled square room with the blinds constantly blocking the sun from the south-facing windows. Our outstanding learning environment was not the result of innovative physical design; no feng shui going on there whatsoever. Our awesome learning environment derived from the brilliance of our teacher, and the attitudes of those who totally bought into the content of the class because they were allowed the privilege of making it their own. Everyone's opinions were respected. Nobody remained silent. We were engaged in a learning circle.