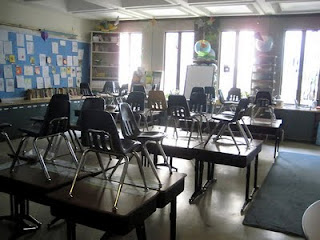 flickr photo via -Marlith-
Another stimulating Twitter conversation had the Nemeticists comparing and contrasting the social dyanmics of routines vs. rituals. The analysis of these two words and their meanings provides insights for education for sure.

rou·tine [roo-teen]
noun
1. a customary or regular course of procedure.
2. commonplace tasks, chores, or duties as must be done regularly or at specified intervals; typical or everyday activity: the routine of an office.
3. regular, unvarying, habitual, unimaginative, or rote procedure.

7. prescribed, established, or ceremonial acts or features collectively, as in religious services.
8. any practice or pattern of behavior regularly performed in a set manner.
9. a prescribed code of behavior regulating social conduct, as that exemplified by the raising of one's hat or the shaking of hands in greeting.
So it appears we can extrapolate meanings as applied to education that define routines as regular, procedural duties done habitually and regularly over the course of time; and rituals as prescribed, ceremonial practices of behavior done habitually over time in a set manner. There are obvious similarities in both of these interpretations, but it's the differences that I'm interested in filtering. I'm also intrigued by the notably negative tone of both interpretations. 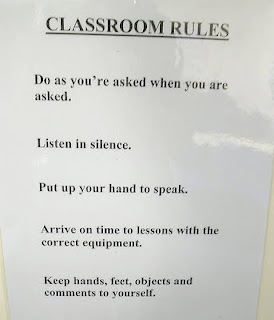 Routines and rituals share an element of patterning in both definitions. Both also connote predetermined and repeated actions. The above definitions lead us to believe ultimately that action within each context is directed from on high... that there is no creativity or self-determinant quality to either of them.

But what is the major difference between them? To me, it is clear that routines are things that are done for a set purpose having to do with keeping an operation or organization running, while rituals are those things that are done because they've always been done, even if many or all of those performing them have long since forgotten why.

I think we need routines, however uncreative and mundane they may be, but I'm less clear on the value of rituals; things we do because we always have. Routines allow us to get things done in schools so we can focus maximum amounts of time on those creative and engaging teaching and learning activities we all know make school interesting to teachers and students. Routines are how we get things done. Rituals just are. I'm not going to get into specific rituals... I'll let you define what those are within your school. I would ask only that you reflect on the necessity of them, and whether each has a purpose allowing more time to be spent doing those creative and engaging things that make school interesting.

In defense of both words, and in the interest of supporting engaging and creative school environments, I've been thinking about good routines and rituals. I know there are some of both in my school, but also some that aren't good. In the interest of fine-tuning their purposes, I suggest to all educators that it's a good idea to reflect deeply on the routines and rituals going on in your schools.

If you're having a hard time determining what their purposes are, perhaps it's time to get rid of them.