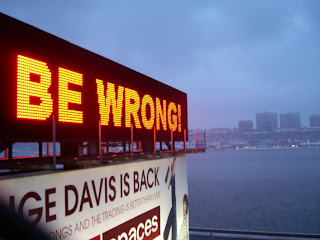 Like many educators across the globe since the dawn of 2011, I’ve been reflecting on stuff. As one who views change as the process of perpetual improvement, I’m not sure I buy into the whole resolution thing, but nonetheless the start of a new year seems to nudge me into a reflective mood… not a bad thing. In a professional context, I’ve been thinking about my practice, my career, my school, what I’m reading, my PLN and a host of other things related to teaching. The thing I want to talk about here though came to me as I was reading a fascinating book over the break that my wife bought me; “Being Wrong- Adventures in the Margin of Error” by Kathryn Shultz. Now that you’ve stopped laughing, let me share some of the brilliance in this book.


Kathryn Shultz’s book is an intensely well-written exploration of wrongness. People have a hard time admitting when they’re wrong, and this is bad. From the overlap…


Kathryn Shultz explores why we find it so gratifying to be right and so maddening to be mistaken, and how this attitude toward error corrodes relationships- whether between family members, colleagues, neighbors or nations.

When I opened the cover to see what this new book of mine had in store, these words are why I knew it would resonate with me. I spend considerable time and effort being wrong in my leadership practice- it’s what I consider to be one of my primary strengths. Making mistakes is inevitable; nobody is immune to this truth. The key in my mind is to do everything I can to mitigate the potential negative outcomes resulting from mistakes by asking a simple question every time I’m about to make a decision or take action on something; “what if I’m wrong?”

I’m not afraid of being wrong… I don’t like it, but I’m not afraid of it. The willingness to accept my fallibility has made me a better leader in a number of ways. I am more open to the views and opinions of others. I view mistakes as opportunities to learn. I perceive mistakes in others as evidence they are active, engaged learners who understand mistakes are a natural and inevitable element of learning. Perhaps most importantly though, my professional relationships are stronger now that I view the fear of being wrong as an insecurity that will not diminish unless I help those I interact with feel less anxious about their fallibility. When I come up against a colleague who flat-out refuses to accept being wrong (from my point of view, or the view of the group), I don’t argue with them but instead ask them the same hypothetical question I often ask myself, “what if you’re wrong?” The objective dialog that follows this question leads to an improved decision-making environment 99% of the time.

Objectivity is how we move wrong to right. In the book Shultz explains the “Cuz It’s True Constraint: every one of us confuses our models of the world with the world itself.” She summarizes subjectivity as the state where we look into our hearts and see objectivity; look into our minds and see rationality and look at our beliefs and see reality. When our belief systems are challenged, Shultz describes three correlates that determine how we deal with it, and that display our unwillingness to accept the positions of others when we believe we’re right, and they’re wrong.
As I read Shultz’s perspective on the three assumptions, my mind filled with memories of colleagues who assumed all three of these correlates about me at one time or another, but more importantly, times when I have assumed each one of them about others.

Hey, owing to the Cuz It’s True Constraint, perhaps it’s human nature to believe our reality tunnels are the only ones leading to truth, and that challenges to our truths are simply wrong. If this is the case, arguing which of our reality tunnels is the right one won’t lead anywhere except toward deeper trenches and increasingly polarized points of view. If we’re going to move our subjective perceptions of how best to do things toward objective and collaborative efforts, we’re going to have to commit to accepting the fact that we might just be wrong, and likely more often than not.

As I reflect on the new year, I’m making a commitment to asking “what if I’m wrong” more often, and”what if you’re wrong” as often as needed to avoid polarized disagreements and going nowhere decision making.
Posted by Sean at 9:45 PM