Oops, I Made a Mistake- Am I Still Learning? A comment from Wendy Young (#Kidlutions) on a recent post I wrote, (Technology in Education- How to Support a Tip in the Right Direction), and an #edchat conversation about creating passion in students on Twitter this evening has my mind racing.

In reaction to my perspective that mistakes are an integral part of the learning process, and not to be feared, Wendy commented that,


as fear and mistakes go, "BRING IT". It is truly the best way to learn. My wish is that all teachers would learn to EMBRACE mistakes as part of the process of learning...and be able to transmit that to the next generation. Needless to say, some of the biggest mistakes have turned out to be things we might not want to live without: post-it notes, potato chips, chocolate chip cookies, velcro, etc! Some mistakes become discoveries in and of themselves!

What a truly insightful comment; one that I fully agree with. I was speaking to my class not so long ago, and it struck me as they were asking me what was going to be on the upcoming test, that they felt a compulsion to know  because they were literally afraid of getting  the answer to a question wrong. They were asking me for a study sheet to take home so they could memorize, and subsequently recall, the correct answers. I was saddened in that instant, and resolved immediately to have a conversation with the class about intelligence... what it means to me, and what I hope it will begin to mean for them.

Intelligence to me is not a thing, it's a process; one that never stops. I believe that those who are willing to submit to the fact that they don't really know much at all are the most intelligent because they have everything to learn... therein lies the process. At the core of intelligence as a process is the concept of thinking. When my class challenged me to provide a study sheet for them, I believe Benjamin Bloom was rolling over in his grave. During my conversation with the class, I explained Bloom's Taxonomy, and they were mystified... I was explaining that there are different categories of thought, and that my teaching and learning philosophy aligns more with the organizing, synthesizing, evaluating and characterizing side of Bloom's learning objectives classification. On that day in my class, my focus on the importance of teaching kids higher order thinking skills became a little sharper.

I believe a culture of learning is a culture of inquiry; one that supports discovery and values creativity. I need to create this culture in my classroom, and I think, as simple as it sounds, Bloom's Taxonomy is the place to start if I want to combat the fear my students feel toward getting stuff 'wrong.' To promote discovery and creativity I need to teach them how to advance their thinking so learning (intelligence) becomes a process for them; not a means to an end (the end being knowledge.)

How have we got to this place in education where recall of facts appears to be what kids think intelligence is? No single person, teacher, parent, school authority or even the students themselves are to blame. The problem is systemic. Schools bear the responsibility to react to perpetual changes in society. The complexities of our ever-evolving world pose an overwhelming challenge for schools to produce citizens who are prepared for them. Educators appear to have responded to this challenge by striving to create people who know. I believe what we should be doing is preparing people who know how to think.

I want my class to be filled with kids who passionately believe they have everything to learn, and that the path to becoming intelligent is paved with the ability to think without fear of mistakes. It's OK to be wrong, right?
Posted by Sean at 12:11 AM 8 comments:

The More Things Change, the More They Should Stay the Same... 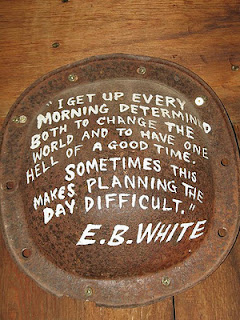 We live in a strange and wonderful time. Our world is changing at a rate never before witnessed in virtually every aspect of society. Arguably, the advancement and integration of technology in society is at the forefront of this change. In the context regarding how technology is changing our lives, a curious irony is taking place.  As our technological capabilites expand, the distance and wonderment between previously unreachable networks of people shrink at the same time.

Technologically speaking, we appear to be rewriting the book on so many things: collaboration; cultural awareness; sharing of skills and knowledge; popular culture; real-time news... navigating this change is a fast-moving train. As a result, I am anxious that ethical and moral relativism is rearing its ugly head. Responsible utilization of digital fluency means different things to different people, and the rationalization of purpose and need regarding technology can take questionable forms. This is why I say, the more things change, the more they should stay the same.

In times of quantum change, there is a tendency to focus on rewriting the rules we think need to align with the change. We forget that, philosophically speaking, everything worth discovering has already been discovered, and that the challenge is to discover it again. In our quest for increasingly faster channels of technology evolution, I believe we can lose sight of deeply entrenched, historical values and essential truths that should be guiding our evolution; timeless bits of wisdom that never go out of style. Ethically and morally speaking, in order to guide the evolution of our new technology paradigm, I believe we should get back to ideological basics in the way we treat each other, the way we govern and the way we lead change.

I have stated before that there is no better arena to lead technology change than within the institution of learning. Can there be a better environment to synthesize timeless truths with the minute-by-minute advances occuring within the digital world? However, in order for this to happen, attitudes and perspectives need to be re-evaluated.

In virtually every collection of thoughtful insights since the beginning of intellectualism,  whether within Toltec wisdom, the Ten Commandments, the Book of Tao or countless others, sages have been extolling the virtues of ethical and moral well-being. Can we define a set of contemporary moral and ethical guidelines for the use of our expanding technology knowledge? Is anybody writing this book? Assuredly, everyone has an opinion related to how technology should be affecting and shaping our lives, and this needs to be respected, but also analyzed from a critical perspective... grounded in the timeless ethical and moral frameworks that already exist throughout the world. As a teacher and advocate for children, I believe school is the perfect place to begin filtering these frameworks alongside the technology integration challenges facing society.

A culture of learning is a culture of inquiry that values discovery and supports creativity, but it's also a culture that acknowledges discoveries of the past that guide our inquiry. Relative to the intense inertia surrounding advancing technology, there is without a doubt, contemporary wisdom to be gained through modern thought processes that will help us continue to learn and develop insight into how to maximize the advance; but there also exists timeless wisdom yet to be fully acknowledged by contemporaries about how leaders of technology change can ground their work ethically and morally. It is the integrative nature of combining the two spheres of wisdom that will allow us the largest capacity to frame technology so its potential to affect society positively will be fully realized.

Calling all schools: this is our task... are you prepared for the challenge?
Posted by Sean at 12:25 PM 2 comments: