You can teach an old dog new tricks... 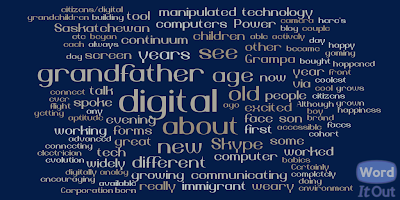 Although I completely get that our children are growing up in a digital age that is vastly different and more advanced than any other widely accessible technology we have previously seen in society, I am growing weary of the whole "digital citizens/digital immigrants" continuum. Let me tell you why.

We recently bought new net-books for our children. My son is particularly interested in computers, and we are actively encouraging his interest. He is a very smart kid, but the traditional school environment isn't really working for him, so we're working on connecting him with different forms of digital interaction so as he grows perhaps he will migrate toward his aptitude for tech integrated learning. He's super excited about the new blog we're building together, the gaming he's getting involved in and different forms of social media software like Skype, Twitter etc.

This evening, one of the coolest things happened. I've been communicating with my grandfather for years now via Skype. Originally from Saskatchewan, he now lives in Ottawa. My grandfather is an electrician by trade, and worked for years with Saskatchewan Power Corporation, so he has some really strong mechanical understanding and worked with analog computers in his role as an operator with Sask. Power, but it wasn't until I sent him an old HP computer we had replaced about 9 years ago that he began tinkering with digital technology. That's also when we started communicating via Skype. When the kids were babies we used to hold them up in front of the web camera so my grandfather could see them and talk to them. They have grown up with this, and they love to visit with their grampa in this manner. Tonight was the first time my son spoke with his great grandfather on his brand new net-book, and he was thrilled... it was touching for his mom and I to see him get so excited about what he was doing. The happiness on his face as he spoke to his Grampa Woods using this tool that he has always known, but never manipulated personally was obvious.

So here's why I'm weary about the digital native/digital immigrant continuum. This evening I witnessed the joy of two people... a ninety-two year old man, and a seven year old boy... as they manipulated a tech tool to digitally connect with each other. My grandfather was born in 1918. Certainly that must place him in the digital immigrant cohort. Think about it... he has lived to see the evolution of the motor age, the age of flight and the video age. He told me once that when televisions became widely available and he got his first in the 1950's, he wondered if there would ever be a day when he would be able to talk with people on the telephone and see their face on some sort of TV-like screen. Well today he did just that, and on his computer screen were the happy faces of a couple of digital citizens- his great grandchildren.