Sometimes the path chooses you...

I have written loads about the power of learning people's stories. This spring as my first year as a school administrator wound down, I had the pleasure and good fortune to attend the retirement celebrations of two very honorable and noble men. One is my former District Superintendent, and the other is a friend and lacrosse coaching colleague, and now a former principal. Once again I was reminded what an honor it is to learn someone's story.
I have worked in my District for ten years, the same term that my retiring Superintendent has been in his position. I have known Don to be the epitome of professionalism and commitment in his role as Superintendent, and I have had total confidence in his leadership and guidance. Bob was the principal of the elementary school that my behavior program was housed within during my first five years with the District. I learned a great deal from him about leadership and the art of caring. He also had an incredible ability to use inaction as a form of deliberate action... a skill I have worked hard to develop over the course of the year, (hard for me as a first time administrator wanting to do whatever it takes to the best of my ability in every single situation). Both of these scholarly and hard-working gentlemen have been mentors to me whether they know it or not, but in the context of this post, I want to focus particularly on an element of their retirement celebrations that is resonating with me.
As part of each retirement party event, a historical overview of each man's life before and during their teaching and administrative careers was presented. As I sat listening to these presentations, and watching the slide shows that accompanied them, I became admittedly emotional. I heard things about each man, impressive things, that I had never known before, and it struck an emotional chord with me. In my professional dealings with each of them, I had never known about the personal challenges they overcame to become the people I had come to know. I had not known about many of the amazing accomplishments each had achieved in their lives, or the scope of their talents outside of the educational environment. Hearing about these things for the first time, and being so impressed by each of their respective personal journeys made me wish I had known these things about Don and Bob when I started with the District ten years earlier. At any rate, I know them now, and I am an improved person as a result. 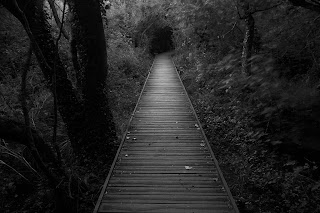 I know that in each man's case, their life journey took them down paths that they may not necessarily had predicted, or even chosen in some cases. I also know that, depending on the situation, they did whatever needed to be done to endure, solve, overcome or perhaps cherish or celebrate the challenges encountered on these paths. This is the mark of  resilient, humble and effective leaders- those who recognize that the path chooses them and understand that the manner in which they walk down it makes all the difference.
In the hurried and complicated context of our everyday professional lives, it is so easy for really important stuff about people to go unnoticed. I am fortunate to have had the opportunity to become aware of some of this stuff about Don and Bob; two honorable men whose mark on teaching and learning has been positively and permanently made, and for that I thank them... and I thank them also for sharing their stories with me.
As a protege and successor to these fine educators, I have been etched by their stories, and reminded that the rewards in teaching and learning far, far outweigh the challenges.
Best wishes Don and Bob.
Posted by Sean at 12:49 AM