Competition doesn't have to be a four letter word... 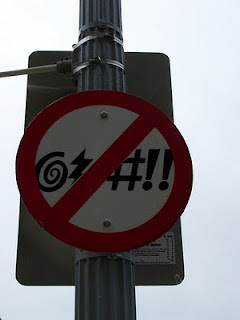 Competition isn't inherently bad. Whether a competitive learning environment is perceived as positive or negative depends entirely on the context within which we define competition.

When it comes to competition, once again, educators are polarizing an issue unnecessarily. It's a black and white issue for us- either we endorse competitive learning environments as positive teaching and learning, or we denounce them as a negative influence. I think it's when we impose a norm-referenced competitive learning environment on kids in school that it becomes potentially negative and perhaps debilitating.

There has to be a middle ground.

Are we not competitive by nature? Just watch a group of kids playing sometime... inevitably, and without provocation, they will engage in some sort of competition... seeing how long they can hold there breath under water, seeing how high they can climb on the monkey bars or just having a friendly running race... kids like competition when it's designed by them. Why not nurture this tendency in school? Perhaps we need to let kids be the authors of their own learning to a degree. Perhaps this is the middle ground we should target.

Let's use a standards-based learning (SBL) environment as our positive example. In as SBL environment, every student is judged against a set of learning standards that are consistent and measurable. When these standards are differentiated into levels of achievement, they also allow for a considerable amount of assessment flexibility. SBL environments permit us to get away from variations of a Gaussian Curve analysis of any particular group of students- arguably an unfair and statistically-biased form of summative assessment, and instead focus on the individual achievement of each student. In this context, each student is competing against his own prior levels of achievement, working to improve his knowledge and skill-set... taking on the responsibility for directing his own learning. In my mind there's nothing wrong with this form of competition.