Silence is many things... 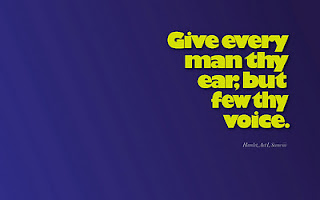 Silence can be a virtue or a curse, a tool or a weapon and a hindrance or an enabler. I'm either annoyed or fascinated by silence; it all depends on the person being silent.

Nassim Nicholas Taleb, (@nntaleb- a pretty damn sharp guy...) tweeted today about silence. He first said, "usually, what we call (a) 'good listener' is someone with skillfully polished indifference"... and then revised the statement to restate, "some reticent people use silence to conceal their intelligence; but most do so to hide the lack of it." This got me thinking for sure.

In education, there is no shortage of playing "the game"; people saying what they believe will get them what they want or allow them to avoid what they don't want, and refraining from what they should say in attempting to avoid scrutiny or punishment. Nobody within education is immune to the politics that surround everything we do, (I would assert that everything, period, is political... why would teachers think they are immune to this?) Choosing when to speak, and when to remain silent is an art in and of itself, and definitely worth constant consideration and practice.

Taleb firstly equates silence to listening with his original statement suggesting indifference on the part of a silent (good) listener. I know many who are highly skilled at appearing intrigued and engaged as they listen to what others are saying, (usually at the same time they are really just thinking about what they are going to say next.) Taleb's revised statement characterizes silence as a tool used either to hide one's intelligence, or conversely, a lack of it... kind of the opposite of the "if you can't dazzle people with brilliance, baffle them with bullshit" saying. The theme I'm taking away from Taleb's statements, (and he is a regular producer of useful and thought-provoking aphorisms,) is that silence can be many things.

Teachers need to learn how to pick their spots so to speak; to choose their hills to die on before they jump into the fray and say too much. Teachers need to get informed and aware of current issues and ideas within education before they speak. That's just the way smart people operate. If you're not ready to be one of these smart teachers, please don't speak.

On the other hand, there are highly intellectual and insightful teachers who for whatever reason, are reserved when they should be bold. These teachers who know need to step up and lead us forward confidently and capably. For these latent, would-be educational leaders, (and especially for those that need their leadership,) silence is a curse.

Within an interpersonal context, silence can be a tool or a weapon. Really strong leaders, (and all teachers are called on to lead at some point- even if that leadership never leaves the context of their classroom- teachers lead students,) use silence as a tool when they need to divert negativity, aggression or innuendo. One strategy I like to use involving silence when teachers, parents or students come to me with a huge problem, (problems are always huge to the people experiencing them,) is to ask them after they've let me have it about their concern, how long it took them to articulate what they were bringing to me, and what they wanted me to do about it. When they answer me with whatever time they come up with, I tell them that I will respond to their issue or request for action after I've thought about it for the equal amount of time. It's interesting that by the time this period has passed, much of the stress of the original problem seems to have passed too. In this case, silence is an enabler... sometimes people just need to be heard and not spoken to.

As a weapon, silence can be particularly effective, but not necessarily in a positive way. Just as all teachers are occasional leaders, they also occasionally need to be led; that's just the way it is. When managers of education have an axe to grind and leave people hanging out there in the ether without direction to illuminate their inadequacy; this is not good. I submit that silence as a tool is much more appropriate than when used as a weapon. It's in this context that silence is always a hindrance to collaboration, progress and solution-focused processes.

So whether I'm annoyed or fascinated with silence really boils down to the question of leadership in education, and how effective educational leaders are regarding their choice to use it. Some are pretty good at it... some not so much.

I get annoyed when uninformed people blabber on without any substance to what they are saying, and fascinated by those among us that have an uncanny ability to pick their spots.

I am fascinated by those who pull silence out of their strategic toolbox when they need to enable others, but get very annoyed by those who use silence as a weapon to demean, belittle or just put people in their proverbial place.

Have you thought about how you use silence lately?
Posted by Sean at 8:27 PM