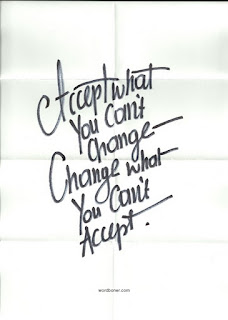 Those of us who are privileged to work in schools need to be aware of  how the slightest act can lead to a massive realization on behalf of one of our disciples... we need to take this element very seriously. I have many stories of exceptional teachers who knew this implicitly.

My career has provided the opportunity to witness some pretty incredible people working very effectively with kids that not too many would be successful with. During my eight years working exclusively with kids from at-risk environments in a congregated special education context, (in Alberta the Department of Education designates these kids under code 42- those manifesting severe emotional/behavioral difficulties... I just coded them as needing someone to believe in them,) I was dumbfounded at the levels of resiliency these kids displayed, and profoundly saddened at the same time as a result of being forced to know what they were overcoming on some days just to make it to school at all. I took the long way home many days during those eight years. At the same time, I was repeatedly encouraged by my exposure to levels of with-it-ness in my colleagues that were off the charts when dealing with these kids' stories.

One such story popped into my thoughts today as I was writing about a colleague in another post- We need schools where "everybody knows your name." Dan McDonald taught in our Behavior Program for ninth and tenth grade kids. One day as Dan tells the story, a young girl arrived at school in a particular state of anxiety. She was pregnant, and the world was weighing heavily on her... that much was obvious. Never judgemental, Dan and his support staff watched her closely that afternoon, looking for any clue that may help tell her story that day. In the gentle conversations that ensued it became apparent that the girl was at her wits end with life in general, and she was planning to get loaded that Friday night... to drink and smoke her sorrows away. As the day wore on, and the staff became increasingly convinced that this young girl was serious, Dan came up with the best 'think-on-your-feet' plan he could; he told the girl she wasn't going to do that.

The response was painfully predictable... "yes I am!", the girl said. Dan reiterated, "no you're not," and she responded, "what the hell are you going to do about it?" Without really knowing what he was going to do if he was being totally honest, Dan blurted out the first thing that came to his mind; he said to one of the support staff members, "Ethel, what are we going to do about it?" Her response was equally off-the-cuff... "write her a note," she said. So Dan did just that; he wrote her a note indicating all of those reasons why she should not go get loaded as she seemed so intent to do that particular Friday night. She took the note, left for the weekend, and they didn't give it another thought beyond adding it to the generalized concern they felt for their students every Friday night.

Flash-forward about a year...
The girl in question had left the school to care for her newborn baby, and as often happened, one day she came back to the school to visit with her child. Dan and his staff never turned these kids away when this happened; it was as if they had a homing instinct that brought them back, and it was important that they were accepted and welcomed. This visit was a bit different, however. They were talking and holding the baby, getting caught-up with the goings-on of the last year or so in the young girl's life, but the conversation went on for much longer than was usually the case. An hour or so after she arrived, when most of what was usually talked about had already been talked about, Dan sensed there may be something else this girl needed, so he asked exactly that... "not that we are rushing you away or anything, but is there something else you need today, because we really should get back to our lessons for the day." The girl started crying and simply said, "yes, I need another note."

Never underestimate the power of small, seemingly insignificant acts of caring... you might be the only one in a young person's life who took the time to perform them.
Posted by Sean at 11:46 PM