Beliefs- Goals are Great, But Not at the Expense of the Journey 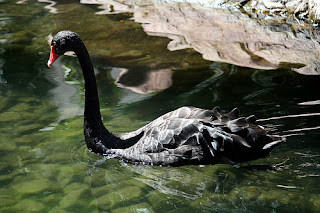 I must not be very successful because I'm going to drop a name. Nassim Nicholas is my favorite tweeter. I read his book, The Black Swan: The Impact of the Highly Improbable

couple of years ago, and am part way through Fooled by Randomness, a follow-up of sorts to Black Swan. Taleb is a thinker, and in the books he debunks many commonly held myths about probability, chance and the models we think studying these entities enable us to predict.

Taleb is one of the most brilliant I have had the pleasure of reading, and he occasionally tweets pearls of introspective wisdom. Yesterday he said, "the opposite of success isn't failure, it is name dropping...There are no objective definitions of failure; success, there are for ..." Once again, Nassim Taleb is speaking to me.

I have said before that I don't believe in failure, only relative degrees of success. We have such skewed perspectives toward success in society. How we view success in schools is no different. How we measure success in society and in school is juxtapositioned against a set of subjectively defined goals that somehow have come to be known as success, once attained. Material good, money, a great job... these are commonly regarded examples of success in society, (at least western society, that is.) In school we measure success by different goals, but goals none the less. Good grades, a diploma, a degree... these are commonly regarded examples of success in school, (at least once again, in our western education system.) These goals are largely absolute and uninterpretable... you have either attained them, or you haven't. They aren't measured on a spectrum, but rather in a have/have not (pass/fail) context. I believe this is very wrong and unproductive in the context of goal achievement and learning.

I find it our human tendency to be so happy, relieved and satisfied when we've reached a goal that in that fleeting moment, we forget about the important journey we took to get there. All the work, stress, effort and commitment applied toward the goal is unceremoniously put aside to revel in the success of reaching the goal, and then very quickly to decide what the next one will be. There's something wrong about this, in my opinion. Goal attainment in life, and as part of learning is a journey, one that should be enjoyed mindfully and deliberately. When we measure goal attainment and learning by pass/fail standards, this process is not possible. I believe that goals are righteous ends to means, but enjoying the journey in pursuit of the goal leads to exponentially greater amounts of knowledge, insight, and contentment once the destination is reached.

There are relative degrees of success, and as quickly as we can realize this, the better off we're all going to be. Like wanna-be pseudo-successful people tend to 'name-drop' as Taleb suggests, teachers who are pseudo-successful at connecting with students in relative ways tend to divert to other scales measuring their "success." In lieu of measuring tangible learning at requisite levels for each individual student, teachers look instead to levels that reflect the mean, and simply place students on this scale where they subjectively think they fit. I have yet to witness a teachers using letter grades that doesn't correlate the letters to percentile ranks within the class, so even letter grades can be curvable. Kids who get placed on the high-end are considered successful, and everyone else falls somewhere below that. I don't think this is OK.

Let's not stop working toward goals; let's stop beating kids up over how relatively well they've reached them. Here's a proposal archived at Personal Learning Stories, a post I wrote with some ideas to create a more student-centered learning process that reflects the thirteen year learning journey in more organic and fluid ways.